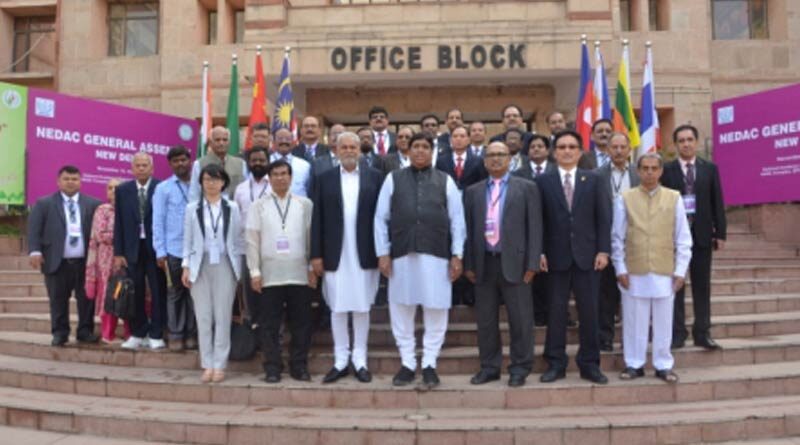 A report on major activities of NEDAC from 2006 (part) to 2009 (upto June) prepared by NEDAC-secretariat was circulated to all participants and Mr. Khan stated briefly the major activities implemented during the above period. The major activities undertaken during the reporting period were : NEDAC General Assembly and a Seminar on Fair Trade held at NCDC in July, 2006, Assessment of loss/impact of Tsunami  and priority needs of Tsunami affected agricultural co-operatives in Sri Lanka  and India (Cuddalore, Tamil Nadu) and preparation/formulation of income raising projects for exploring funding support of donors, preparation and circulation of NEDAC and Seminar report; Organized a regional workshop on the role of agricultural co-operatives in bio-fuel development at community level for rural food and livelihood security held at Pattaya  and holding of NEDAC EXCOM in 2007 and follow-up actions with Farmers’ Organization Authority (FOA) Malaysia for holding the NEDAC G.A. in 2008; FAO-NEDAC Regional workshop on role of agricultural co-operatives in response to the impact of natural disasters and climate change was held at NCDC, New Delhi, India in 2008, approaching NEDAC members in India and Thailand to seek their agreement for hosting NEDAC G.A. in 2008 or 2009 as FOA, Malaysia expressed their inability to host the NEDAC G.A. in August 2008. After lot of efforts and discussions with NEDAC members in India and Thailand, agreement of Co-operative Promotion Department (CPD) Thailand was obtained for hosting the NEDAC G.A. in 2009.

Other activities in 2008 were exploring the possibility of NEDAC members’ study tour to China which could not be done due to non receipt of clearance from the International Co-operation Department, MOA, China, P.R.

Other activity was concerning the Agriterra fund received from Agriterra a Dutch NGO for post Tsunami rehabilitation activities. NEDAC earned $5000 as income from operation of this fund. During 2009, major activities were on organizing the NEDAC G.A. and the seminar on National Policy hosted by Co-operative Promotion Department (CPD) Thailand, exploring with Sri Lanka and China, P.R. about their hosting of NEDAC members’ study tour in 2010 and 2011. The other activity was updating the NEDAC Web site (www.nedac.org.in) with new version and revised text and the NEDAC members were duly informed of the NEDAC Website operated from NCDC, New Delhi, India

The other activities during the period were on routine matters like correspondences with members concerning payment of NEDAC membership fee, maintaining contacts with NCDC for updating information in NEDAC Website operated from NCDC and membership drive.

The Financial Report/Income and expenditure statements for 2006 (July – December), 2007, 2008 and 2009 (upto June) as well as the NEDAC Bank Account Statements duly countersigned by the Bank were earlier circulated to all participants in the meeting.

Mr. Khan informed the Assembly that three types of accounts were/are maintained with the Siam commercial Bank which is also the Bank for FAO, UNICEF and UNIDO, Bangkok. The Accounts were/are;

(i) US Dollar A/C for membership fee

(ii) Baht A/C for exchanging US Dollars into Baht and maintain in Baht A/c to pay for local costs such salary of NEDAC Clerk-cum-typist/Secretary, purchase of office stationary, payment of fax and telephone charges etc.

(iii) NEDAC Agriterra fund. The fund received through a contract with Agriterra are in USD and maintained in this Account. All expenses concerning travel, workshop and other costs for post Tsunami rehabilitation activities were maintained in this account. Mr.Khan explained the opening balance, fund received as membership fee, fund spent the closing balance each year under three types of accounts for each year.

Mr.Khan further stated that the Bank statements of three accounts duly countersigned by the Bank authority confirm that the receipts and disbursements as included in the NEDAC financial reports have correctly/properly been recorded/reflected.

In conclusion, Mr. Khan stated that NEDAC expenditure would have been higher/more had there been no support from the host organization to meet the cost of board/lodging and internal transport for participants. NEDAC members appreciated the support of host organizations in implementation of some NEDAC activities in different countries.

Mr. Wim Polman Bio-Energy Officer, FAOHQ, Rome (former Rural Development Officer FAO, Bangkok who was technical backstopping officer for NEDAC) and Mr. Ralph Houtman Marketing and Finance Officer FAO Bangkok who is now technical backstopping officer of NEDAC mentioned about various aspects of collaboration between FAO and NEDAC. Mr. Polman mentioned that delegates from each country should know from the Ministry of Agriculture and Co-operatives, Ministry of Co-operative in their respective country about the projects in agriculture, rural development and co-operative sector being financed by IFAD, World Bank or through bilateral assistance and thus enable to derive benefit by involving agricultural co-operatives in those projects for small and poor farmer development. Mr. Polman stated unless Agric. Cooperative change their attitude for involving themselves in the development projects financed by UN Agencies, other donors in the country, the prospect of income and employment generation especially for small and poor farmer-members will remain rather limited. He mentioned about a workshop on bio energy to be held in Rome in October, 2009 and he has arranged participation of three officials (one each from India, Nepal and Thailand) in that workshop. He suggested Agricultural Co-operative should follow the suggestions/recommendations of the last FAO-NEDAC workshop on role of agricultural co-operatives in bio fuel development held at Pattaya, Thailand in July, 2007. He reiterated his support to NEDAC and NEDAC members in due course would be contacted by him on bio energy and related matters.

Mr.Ralph Houtman mentioned that he has been technically backstopping two other Regional Bodies, namely Agricultural and Food Marketing Association for Asia Pacific (AFMA), Asia-Pacific Rural and Agricultural Credit Association (APRACA) and NEDAC is now the third Regional Network for his technical backing and collaboration. He mentioned that he was involved in the past with some agricultural co-operatives on micro finance/micro credit. He was fully aware that some co-operatives are member of AFMA or APRACA and this would enhance linkage and collaboration amongst the three organizations – AFMA, APRACA and NEDAC for betterment of small farmers in the region.

It was also suggested that during duty travel to countries, the technical backstopping officer can visit the co-operatives and provide policy advice and technical guidance. He can also help in identifying and enrolling new members for NEDAC from different countries of the region.

Mr.Jiji Thomson IAS, M.D, NCDC acting as Chairman of the session requested nominations for Chairman/Vice Chairman and three members of new EXCOM for the period 2010 – 2011. The Assembly through consensus elected a Chairman from India, one Vice Chairman from the Philippines and three members. Since India has five members, India wanted time to discuss amongst themselves about the Chairmanship. After discussion, India suggested that the Chairmanship should continue with NCDC and IFFCO to act as Alternate Chairman which the General Assembly accepted unanimously by clapping their hands.

The list of newly elected EXCOM members was announced in the meeting and those elected as office bearers are as follows:

Mr.Khan pointed out that Philippines now being an Associate member cannot hold any position in NEDAC EXCOM. Mr.Buagas informed that in 2010 CDA will pay full membership fee of $2000 and will thus be eligible to hold position in EXCOM.

A brain storming session was held to discuss the future activities of NEDAC. Then a committee was formed to discuss/prepare the workplan for 2010 – 2011. The draft workplan/major activities for 2010 – 2011 prepared by a committee comprising Dr.Gopal N. Saxena, Director (co-operative Development) IFFCO, Mr.S. Buagas Administrator, CDA, Mr.B.M.Acharya, Acting Member Secretary, NCDB, Dr.Daman Prakash Resource Person, New Delhi India, Mr.Ralph Houtman, FAORAP and Mr.W.I.Khan NEDAC was circulated in the meeting. The assembly approved the workplan. However the implementation would be subject to availability of funds which should be explored by the EXCOM and NEDAC Secretariat.

The workplan is at Annex “A”. NEDAC Secretariat was asked to assess the funding support/budget for implementation of the activities. It was also decided the EXCOM should meet in 2010 in India to review the funding situation. The exact dates/month of the next EXCOM will be circulated to the EXCOM members by NEDAC Secretariat after consultation with the NEDAC Chairman.

Mr. W.I. Khan while presenting the NEDAC reports on activities and income/ expenditure statement informed the General Assembly about the expiry of term of assignment of Mr.Khan and the Clerk-cum-typist/Secretary in December 2009.

Considering the satisfactory services provided by Mr. Khan and NEDAC Secretary Miss Suthusanee Rakpanyakaew, the General Assembly decided to extend their assignment upto end December 2011 and authorized the EXCOM to finalize the financial aspect and any other matters for their extended service.

The General Assembly after reviewing the suggestions/recommendations of the two working groups agreed in principle to include implementation through NEDAC workplan subject to availability of funds.

Mr. Khan informed the participants present in the meeting about the new text and updated version of the NEDAC Website (www.nedac.org.in) in 2009 and requested members to provide success stories of agricultural co-operatives, information on important events like meeting/workshops, news letters etc be forwarded to NEDAC Secretariat for necessary editing and forwarding to NCDC to include in the NEDAC Website. Chairman NEDAC Mr. Jiji Thomson assured the members that NCDC will provide full support in the operation of NEDAC Website based/installed at NCDC.

Mr. Segfredo Buagas Administrator, CDA offered to host the next General Assembly in 2011 in the Philippines. Mr. Jiji Thomson, Chairman NEDAC stated that if the offer of CDA does not materialize for some unforeseen reasons, NCDC would host the General Assembly in India. NEDAC members appreciated the offers.

The General Assembly expressed thanks and gratitude to the Co-operative Promotion Department (CPD), Ministry of Agriculture & Co-operatives, Thailand for hosting the NEDAC G.A. and the seminar on national policy for development of agricultural co-operatives and for their generous hospitality and courtesies extended to the delegates during their stay in Bangkok. The assembly resolved to extend special thanks and appreciations to Mr. He Changchui, Assistant Director General and FAO Regional Representative for Asia and the Pacific for his support to NEDAC and for his address in the opening ceremony of the NEDAC G.A. and the Seminar. 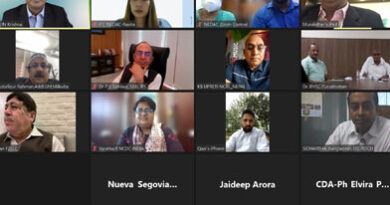 The first meeting of NEDAC Committee on “Livestock Cooperatives” 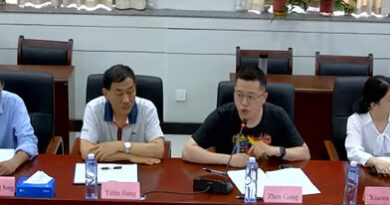 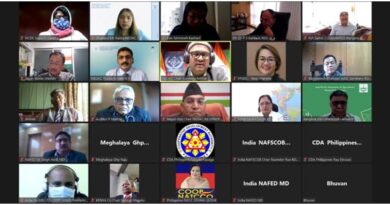 The First Meeting of NEDAC Committee on Emerging Technologies and Threats 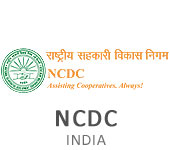